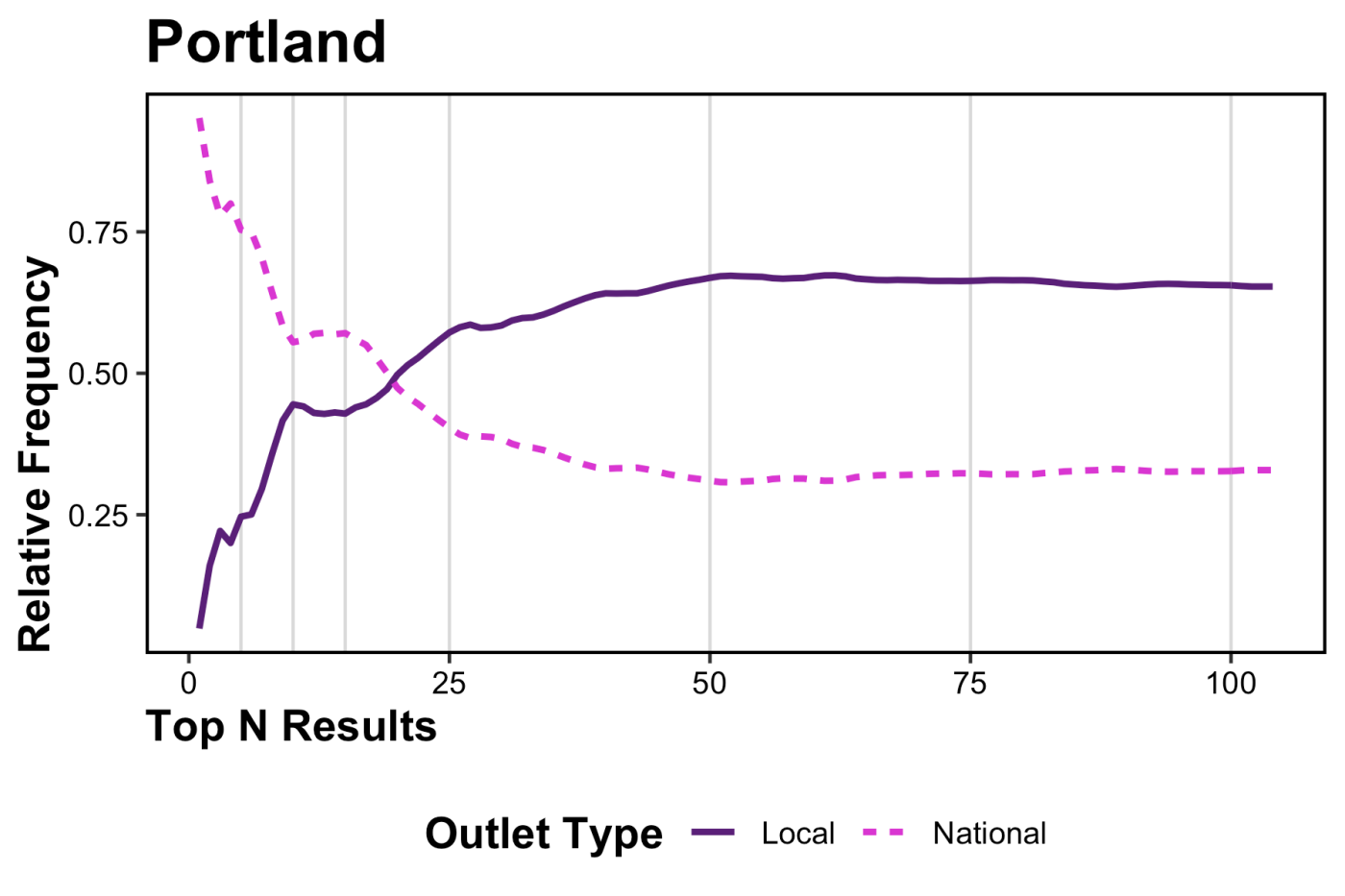 Portland, OR became the object of national attention in July as the standoff between federal agents and protesters reached its climax. National attention to the conflict in Portland was awakened by the New York Times on July 17. Search interest for the topic peaked on July 20th. But this belies the coverage from local outlets and journalists, who had been reporting on the protests in Portland for nearly a month at that point.

As journalists from the New York Times, CNN, and other national outlets swooped in to cover the story, local journalists complained that they were missing important context and misrepresenting the story. Misrepresentations can have serious implications, such as when the federal government describes Portland and other cities as “anarchist jurisdictions”, even when local residents claim that such labels are mistakenly applied.

Our research suggests that this problem of suppressing local narratives in favor of national outlets was compounded by news aggregators, such as Google News, which is used by 15 percent of Americans as their primary source of news. During the unrest, we collected Google News results for the term “Portland” in every county in America. We labeled the returned outlets as local or national. 75% of user attention is given to the first five results in an online search. Looking only up to this threshold would mean that in the case of the Portland protest, people were 3.06 times more likely to read the story from a national outlet than a local outlet. For the top 10 results this share of attention grows to 91.7%. Even at that cutoff, people were still 1.24 times more likely to read a national news story than a local news story.  If readers kept scrolling past the 20th result, eventually local outlets become the dominant source of information, but national outlets were the main sources for early (and more likely-to-be-clicked) results.

Google News’ bias in favor of national outlets over local outlets is not only limited to the Portland protest. In a new study out in Nature Human Behaviour, we conducted an audit of Google News. Using adjustable features of web browsers, we ran repeated searches for a set of queries as if we were in each county in the United States. These queries were selected to reflect topics of especially local focus (e.g. “mayor” and “school board”) and those of broadly general focus (e.g. “president” and “shutdown”). For each search, we saved the results and classified the outlets Google News returned as being local, regional, national, or international in their focus. We found that the closer to the top of the list we got, the more national outlets were returned, even for queries that were locally oriented and ultimately returned more local outlets than national outlets the deeper one looked.

Our findings matter, because local news outlets are facing a massive crisis, leading some scholars to label the problem as one of “expanding news deserts”. As of 2018, the United States had lost about 1,800 local newspapers, in rural, suburban, and urban communities. This is a huge problem because local news organizations are important for many reasons, such as helping to hold officials accountable, reducing citizens’ partisan polarization, and highlighting local issues in the national eye.

It’s crucial that we understand whether new technologies and platforms are making it more difficult for these outlets to stay open and do the job of keeping us all informed. So, while we aren’t big tech companies or policymakers, how can we do our part to support local news outlets?

First, you could make the effort to increase your literacy about issues of algorithmic fairness. Algorithms decide how you see the world and what you make of its story. Read the work of Safiyah Noble (Algorithms of Oppression), who has discussed how algorithmic biases reinforce racism on the internet, and Ruha Benjamin (Assessing Risk, Automating Racism) discusses how risk assessment tools help to automate racism. The work by Cathy O’Neil (Weapons of Math Destruction) discusses how big data can increase inequality and threaten democracy.

Second, you could beat the algorithms on social media by following, upvoting, and sharing news from the social media accounts of local news outlets. We did not study other platforms like Facebook, which are increasingly becoming the source of news for Americans. But you can read the work from other scholars who have done so. We know even less about how Facebook’s algorithms determining what users see in their timelines or news portals select and organize content. Given the large shares of folks who use these platforms, the decisions they make could impact the flows of attention to news outlets even more than Google News.

Third, on Google News, you can customize your news feed so that you see more of what is relevant to you. Support local businesses! But beware the dangers of falling into a news echo chamber, or the pink slime propaganda outlets please.

You can read our other analysis on the Monkey Cage blog about Google News bias in results about early voting, and our Nature Human Behavior paper is here.